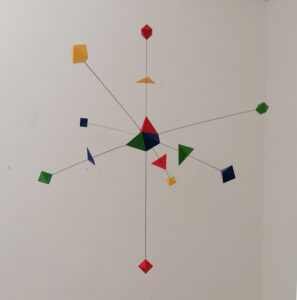 The tetrahedron is the smallest possible body, also called simplex. It is essentially 4-dimensional.

Two perpendicular lines of equal length are not in the same plein. The – of the + is not in the same plein as the | of the +. Connecting the 4 endpoints of the two lines in space with equal length lines form 4 equilateral triangles, the tetrahedron. We get two more perpendicular line pairs with the same spacial distance. They form the 3 dimensions. The tetrahedon has the same shape in all dimensions and is its own dual body. (connecting the midpoints of the surfaces)

The 4 dimension axes go through the 4 vertices and midpoints of the opposing triangle.The 4D simplex or pentachoron unrolled in 3D results in putting a tetrahedon on each side of the tetrahedon. It is like pulling the tetrahedon from each vertex through itself inside out on the triangle side.

The 4 axes devide the central tetrahedron into 4 equal parts, the quarter-tetrahedron. They are each centered on an axes and move through each other outward to appear outside.