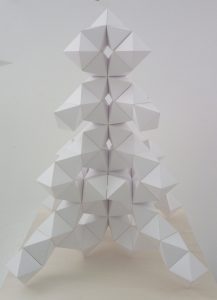 Octahedral voids is an infinit pattern of stacking octahedra on each side of an octahedron. A space-filling pattern needs tetrahedra in addition. So the angular difference result in gaps between the blocks of octahedra. It starts with one central octahedron. 4 octahedra are attached on the lower half. On each of the lower sides a block of 9 octahedra is attached. They are the upper half sourrounding a block of 9 octahedra and so on. The holey pyramid could be mirrored on the top octahedron. The gaps have a special spacial form, iterating with the octahedral blocks. They are the voids of the octahedral pyramid. A unique division of space in bodies and voids.